Guelphs and Ghibellines in Florence: it’s always a matter of love.

Every story in the world has its own origin, often unknown, intriguing and surprising. Our Florence is made up of plenty of anecdotes with very important meanings which all left a mark not only on the history of the city but also on the territories beyond its walls. An example of this is the historical rivalry between the Guelphs and Ghibellines, medieval factions supporting the Pope and the Holy Roman Emperor, respectively. In Florence this controversy was very much alive. We can even say that this dispute was born precisely in Florence, between Santo Stefano church and Ponte Vecchio. As all memorable stories often do, this one starts with a broken heart, the heart of Buondelmonte de’ Buondelmonti, a knight that couldn’t resist the call of his first true love.
He was being forced into a marriage in order to atone for a wound he had inflicted with his sword to a nobleman of the Amidei family. 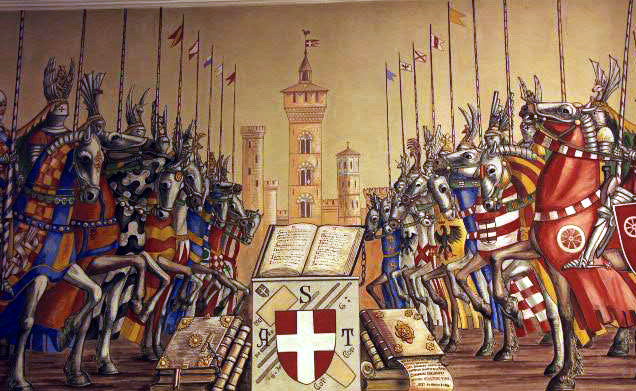 Rebelling his hostile fate, led by passion and impulse, he married the woman he loved, leaving his promised to her own devices. Such behaviour provoked the rage of the Amideis family, furious for being humiliated on top of being wounded, and therefore they started to plot against the bold young man. The situation further deteriorated, emotions ran high and Buondelmonte was killed just after passing Ponte Vecchio by the knifes of the rioters and in front of his beloved’s eyes.

It was the Easter morning of 1216. The murderers, in order to escape the law, appealed to the “imperial right”, thus avoiding the laws of Florence and opening the door to the action of the two main powers of the time – the Pope and the Emperor – on local political issues. As the atmosphere was already tense during the recurrent government crisis, on the following day the Florentine nobles divided into Guelphs and Ghibellines, faithful either to the Pope or to the crown of Federico II respectively. The dispute, carried on over private matters, became one of the most important political elements of the European landscape for two centuries.

Certainly it is the universal engine of all of our wandering. Either for a good or evil cause, it pushes us beyond our own destiny, allowing that person beside us to take part in our journey and to change it. This and many other fascinating stories were written in Florence! Come and get to know them! Reserve your stay at Hotel il Guelfo Bianco and we will even make time to tell you why we have chosen our name…