Tales of “vinaini” and eating in the streets

Whenever I hear talking of street food in Florence, moments like the one I am about to tell you come to mind. Looking back, I realize us Florentines happen to set trends and habits very often before they become popular. Eating in the streets of Florence is one of those things.

So, it was around 1974: in order to break the everyday routine, I much preferred to take a long walk through the streets of Florence rather than have lunch at my company’s cafeteria, a nice walk in the open air that often led me and my colleagues to the “Vinaino” in via Dei Tavolini (a “vinaino” is a small stand where you can sip a glass of wine and taste some “aperitivi” outside).

In this small street, almost in front of the Church of Orsanmichele, behind the Cathedral, the two brothers in law who were managing the place had a lot of work, even if they weren’t offering very much by the way of choice: sandwiches with ham, lampredotto (cow stomach) and rigatino (a Tuscan kind of bacon), which you could stuff with a vegetable sauce, then there was also the classic Tuscan crostini with chicken liver. But nothing else.

There were loads of “vinaini” all around Florence, above all in the central streets. They offered the opportunity of a quick meal where you could eat standing or leaning on the bar in the street, with a glass of wine, obviously.

Wine was absolutely the only thing you could drink. I remember I always chose a San Casciano red wine, a very simple one like the majority of wines behind the bar, but the aroma was pleasant and well combined with the kind of food that was offered. 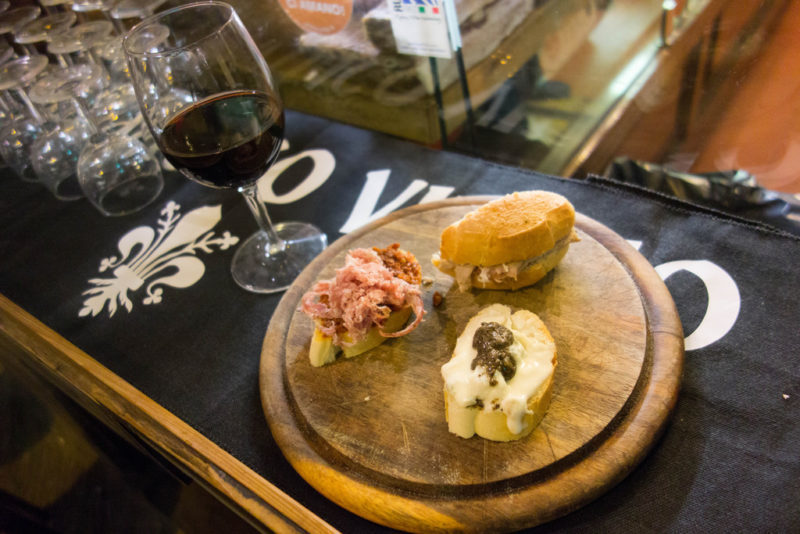 Today in Florence the “vinaini” are something different, their heritage has been taken partly by Trippai kiosks and partly by central bars, former “vinaini” preserving that lively atmosphere that always made them the perfect gathering points for Florentines and travellers. On their bars, Lampredotto, Tuscan cold cuts panini and a lot of delicacies from our region are served and the wine list is now at the same level as those in the best restaurants.

We can deduce, therefore, that all this eating and standing along the streets started the current street food trends and all of its variations.

Probably, because it was in Florence, two centuries ago, at the corner of via dei Calzaioli, that the “Caffè dei Ritti” was born, the first coffee bar where coffee would be drunk standing at the bar. But that’s another story of my Florence, and if you pass by the Hotel Il Guelfo Bianco I’d be happy to tell it.

See you soon, Alessandro Bargiacchi
For more information and to book your weekend in Florence write to: info@ilguelfobianco.it!